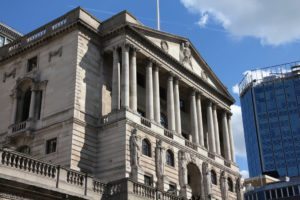 The Bank of England has raised interest rates for the seventh consecutive time to 2.25 per cent, the highest since 2008, in an attempt to contain near double-digit inflation.

The move comes before tomorrow’s tax-cutting mini-budget where Kwasi Kwarteng, the chancellor, will announce a series of measures to reduce levies and cut regulation to stimulate growth. The shift in fiscal policy, which includes an emergency price cap on energy bills for households and businesses, is expected to support growth and keep inflationary pressures elevated into next year.

The UK’s consumer price inflation fell back to 9.9 per cent in August from 10.1 per cent on the back of falling oil prices, but rate setters have tightened policy after signs that price rises have spread throughout the economy, raising the cost of food and services last month. The US Federal Reserve raised its benchmark rate yesterday by 0.75 percentage points for the third month in a row.

The MPC has raised borrowing costs at the fastest pace in 30 years to fight price growth that is running at the highest level since the 1980s. The bulk of the UK’s inflation can be attributed to rising global oil and gas prices after Russia’s invasion of Ukraine. Unemployment has also fallen to a record low, helping to force up domestic prices and wages.

Money markets are forecasting that the Bank will have to go much further in its tightening cycle, forcing rates to a peak of 4.5 per cent next year to lessen the impact of looser fiscal policy. Economists expect that the emergency price cap for businesses and households will shorten the length of an energy-induced recession this winter.

Sir John Gieve suggested that the Bank and the government are pulling in different directions with Kwarteng poised to announce more than £30 billion worth of tax cuts in the mini-budget, as the government freezes corporation tax, reverses the rise in national insurance and cuts stamp duty.

Gieve said: “It does complicate things. [The Bank] will have to arm itself to push interest rates up even a bit faster than it had planned. The Bank of England is worried about inflation, it’s a massive overshoot. Demand in the economy is outstripping supply.

“They are trying to slow down the economy. The rhetoric we’ve heard so far from the new government is that they want to speed it up by increasing borrowing.”

“While the freezing of the energy price cap will reduce near-term peak inflation, price pressures are still set to remain strong and the MPC will be keeping a close watch in the coming months.

“With signs of an economic downturn coming down the track, firms will be looking to the fiscal statement to help perk up confidence and get more firms investing and growing.”

Commenting on the announcement, David Bharier, Head of Research at the British Chambers of Commerce (BCC), said:  “The decision by the Bank of England to raise the base rate to 2.25% is further evidence they are taking a hard line on tackling inflation. Our research shows that unrelenting inflation, largely driven by rising energy costs, is by far and away the top business concern at present.

“But the Bank faces an increasingly tricky balancing act. The interest rate is a very blunt instrument to control inflationary pressures that are largely driven by rocketing energy costs and global supply chain disruption. The Bank’s decision to raise rates will increase the risk for individuals and organisations exposed to debt burdens and rising mortgage costs – dampening consumer confidence.

“Recent energy price cap announcements will have provided some comfort to businesses and households alike andshould place downward pressure on the rate of inflation.

“Friday’s fiscal statement by the Chancellor is now a critical moment. He has the unenviable task of shoring up the economy whilst avoiding additional  inflationary stimulus.

“The Bank, looking to dampen consumer demand, and Government, looking to increase growth, could now be pulling in opposite directions.

“What businesses will want to see is a plan to address the short-term drivers of inflation as well as a long-term strategy to promote investment that gives them confidence for the future and counteracts the recessionary pull of rising interest rates.”

Giles Coghlan (Chief Market Analyst, HYCM) added his comments regarding the announcement, saying: “The Bank of England’s (BoE) decision today to raise the base interest rate by 50bps was a disappointment to the STIR markets that saw a 93% chance of a 75bps hike. This resulted in an immediate GBP sell off following the BoE’s release. With inflation at its highest level since the early 1980s, the Monetary Policy Committee (MPC) have to act decisively to try and tackle problematic inflation.

“However, by being too aggressive on inflation, there is a danger that the BoE stagnates UK growth, which is perhaps why the BoE took a more conservative approach today. Since their last meeting, Liz Truss has unveiled her emergency energy package which is projected to cost around £100 billion. According to Governor Bailey, the UK energy price guarantee will significantly limit further inflation, supporting demand relative to August’s forecasts. With the Fed raising their base level by 75bps last night for the third time in a row, and raising the terminal rate to 4.6% vs the prior terminal rate of 3.8%, the BoE may have resisted the urge to follow suit to be more mindful of the coming UK recession.

“With the pound already on its knees, there is a danger that the BoE’s decision creates a stagflationary environment in the UK by hiking rates as growth is slowing. With this in mind, the performance of GBP following today’s decision should be keenly monitored by all investors as there is still more of a sell bias in place for the GBP moving forward. All eyes now turn to the mini-budget tomorrow.”