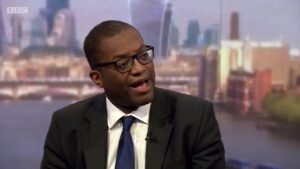 A 1.25% rise in National Insurance will be reversed from 6 November and the government will axe a planned tax rise to fund health and social care.

The NI rise was introduced in April under former chancellor Rishi Sunak, but during the Tory leadership race Liz Truss pledged to change it.

New chancellor Kwasi Kwarteng made the announcement ahead of a “mini-budget” on Friday.

He said the government would also cancel a separate tax, the Health and Social Care Levy, which was due to come into force in April 2023 and scrap a planned increase to dividend tax rates.

Ahead of his mini-budget on Friday, he said: “Taxing our way to prosperity has never worked. To raise living standards for all, we need to be unapologetic about growing our economy.

“Cutting tax is crucial to this – and whether businesses reinvest freed-up cash into new machinery, lower prices on shop floors or increased staff wages, the reversal of the levy will help them grow, whilst also allowing the British public to keep more of what they earn.”

The 1.25% increase in national insurance was announced by former chancellor Rishi Sunak to help fund health and social care.

Read more:
National Insurance rise to be reversed in November