Gates is featured in the video lip-singing song lyrics sung by a child as he stands in a kitchen wearing t-shirt emblazoned with, “Ask me about corn.”

“It’s corn!” Gates exclaims, as he takes a large bite out of a corn ear. “It has the juice!”

The 27-second video also features a  photo of Gates as a child holding a corncob in a corn field.

Corn “accounts for 30% of the food consumed in Africa. But it is at risk. African crop researchers are creating a new, more resilient type of corn,” the caption on the video states.

The video is another attempt by Gates, the fourth richest person in the world and the top financier of the World Health Organization, to condition the public to accept the Great Reset agenda that he and his predator-class allies would like to impose on the world.

The sixth annual Goalkeepers Report, published by The Bill and Melinda Gates Foundation on Sept. 12, highlights how two of the United Nation’s Sustainable Development Goals, food security and gender equality, are being achieved.

The report lauds what Gates calls “magic seeds,” crops including corn and rice that have been genetically modified to resist hotter, drier climates, as a remedy to alleviate world hunger.

“Of course,” Gates writes, “the seeds weren’t actually magic, but by breeding select varieties of the crop, the researchers believed they could produce a hybrid maize that would be more resistant to hotter, drier climates. They succeeded wildly.”

The Gates Foundation ” has invested heavily in farming technology, including a type of corn seeds that thrive at higher temperatures and in drier conditions, known as DroughtTEGO,” Daily Mail reports. “The seeds were first developed under a program of the African Agricultural Technology Foundation, to which the Gates Foundation has given $131 million since 2008.” 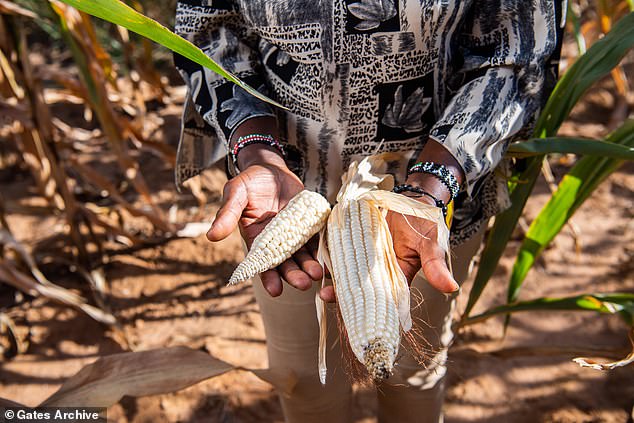 Gates made billions running Microsoft and then suddenly emerged as a self-proclaimed expert on vaccinations.

The corporate press and fact-checkers insist claims that Gates is a eugenicist are premised on conspiracy theories, but the 66-year-old business magnate has openly advocated using vaccines to  reduce population growth and lower carbon emissions.

“The world today has 6.8 billion people,” Gates explained during a 2010 TED Talk. “That’s headed up to about 9 billion. Now, if we do a really great job on new vaccines, health care, reproductive health services, we lower that by perhaps 10 or 15%.”

Gates is currently the largest farmland owner in the United States, owning at least 242,000 acres across 18 states as of January 2021

As the Gateway Pundit has reported, Gates is also a top investor in Memphis Meats, a group of radical animal activists working in a lab to grow meat from livestock cells and end livestock production in the US.

By acquiring more farmland than anyone else in America, Gates can dictate what will and won’t be produced on American farms.

Creepy Bill Gates is going to change your diet whether you want him to or not.

The post WATCH: Creepy Bill Gates Just Posted Another Bizarre Video — This Time He’s Promoting Genetically Modified Corn To Save Us From A Famine During The Planned ‘Climate Crisis’ appeared first on The Gateway Pundit.