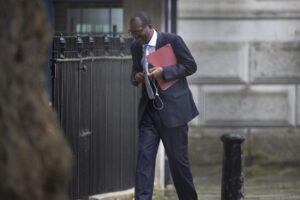 The chancellor announced £50 billion worth of tax cuts including scrapping the rise in national insurance, freezing corporation tax and cutting stamp duty.

The decision to scrap the 45p rate of income tax, which affects 629,000 people who earn over £150,000, is potentially politically explosive.

Labour is likely to argue that it represents a tax cut for the rich at a time when people are struggling to cope with the cost of living.

Liz Truss and Kwarteng, however, believe it will help incentivise investment in the UK. He will also bring forward a 1p cut in the basic rate of income tax, which was due in April 2024, to next year, a measure that will cost about £5 billion.

Kwarteng had already confirmed the reversal of the 1.25 percentage point rise in national insurance payments, which will take effect from November 6. Ministers said it meant 28 million people would be £330 better off next year. The increase had been designed to raise £13 billion a year to fund health and social care.

Previous post Mini-budget 2022 highlights: a summary of the key points