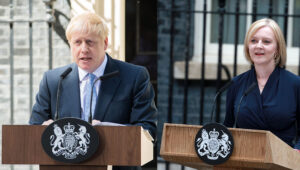 Now that Liz Truss is Prime Minister the scrutiny of her speaking performances will be even more intense than it was during the leadership contest.

Chris Arning, Toastmasters International a public speaking club analyses our new PM’s speaking style and compare it with the style of her immediate predecessor.

Johnson’s blarney and confidence are evident. When speaking he introduces a wide range of humour; self-deprecating or subtly self-aggrandising, to deflect criticism. He uses hyperbole, alliteration, florid metaphors and on occasion makes use of his classical education. His Peppa Pig interlude during a CBI speech was regarded as somewhat odd but it created headlines. This is the ‘Pratfall Effect’ where calculated mistakes aim to build rapport with a politician’s base. His famous riposte to Tony Blair who urged the British people to rise up and resist Brexit was to tell people to rise up and turn off the TV when Blair appeared.

Liz Truss uses humour much less and it doesn’t seem to come naturally to her. She joked about her penchant for Claire’s Accessories in the leadership debate, but it felt out of her comfort zone. You wonder how she will cope at the despatch box over the next couple of years. However, she may surprise us with her adaptability. Given the focus on policy, facts and absence of self-reference, humour and irony, we can say with some confidence that she is less of a showman than her immediate predecessor.

Boris Johnson’s shambling, dishevelled demeanour and his slight stoop when he speaks is familiar to everyone. Whether this is authentic or a ‘contrived insouciance’, much of his personality serves to demonstrate that he is an outsider to formal structures (though ironically someone with an Establishment upbringing), flouting political correctness and breaking protocol.

Liz Truss looks very different. She has an upright posture and seems the epitome of rectitude. She’s plain speaking and seems to want to convey a serious statesmanlike image. During one of the recent TV debates, she wore a blue trouser suit, perhaps in the hope that we’d see her as a modern version of former PM Margaret Thatcher.

Boris Johnson is known for the animated nature of his gestures; he swivels his body round and shakes his frame to emphasise his points and often uses the classic closed fist movement to emphasise points. He is also not above finger-pointing in seeking to land his major points.

In her first speech as Foreign Secretary at the 2021 Tory Party Conference, Liz Truss did not once move her hands above the lectern. It may be that that was what was required in that first speech. However, in the leadership debates against Rishi Sunak, Truss was seen placing both hands out in front of her outstretched and shaking them quite emphatically. This gave a sense of passion, but overusing these gestures can betray an impression of exasperation and even of losing control. Not great for someone in such a pressured leadership position.

Boris Johnson appears to be bumbling along slightly garbling his words, a style which confirms his roguish persona. He then suddenly introduces a crescendo of mock indignation. He speeds ups, rattling off phrases and/or invective to ram his point home. It is worth remembering that Johnson debated at Oxford and that helped forge a combative style.

Liz Truss is more monotone in her speaking style, injects less emotion into her voice and looks less energised in general. When she modulates her voice, it is quite restrained and never quite hits the highs. Those who have previously worked with her suggest that her voice has dropped in pitch and has also slowed down. Truss has occasional attentional blips where she seems unsure of what she is saying though, to date, she has recovered quickly.

Let’s look at two speeches, Boris Johnson’s on being voted in as Prime Minister and Liz Truss’s first speech on being appointed Foreign Secretary. How do they compare? Truss focused on the policy headlines and sets out what she intends to do. Johnson’s speech was much more focused on a personal appeal, paying tribute to those who campaigned for his candidature, and promising to steal all of Jeremy Hunt’s ideas. He uses masses of pathos and humour which Liz Truss did not do.

As we know the role of Prime Minister is a huge challenge. How Liz Truss develops to cope with the speaking element of this challenge will be fascinating to see.

Read more:
Truss vs Johnson: A comparison of their speaking styles